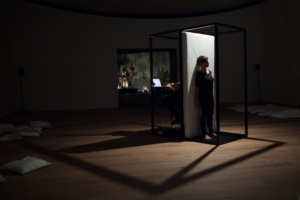 The Swiss artist Anne Rochat has been developing a radical practice of itinerant performance since 2008. Her latest proposition is titled Flu.o, a Laboratoire performance errance (“laboratory of performance and wandering”) consisting of five pieces devised during one year spent wandering the entire globe. This unprecedented artistic project is a poetic expedition that unfolds on three levels, which include two performances in vivo (Messaline and CHRONOS); two filmed and projected performances (Doris Magico Back to the Wall and Hic & Nunc); as well as an ex cathedra performance shown in real time (TOPO). All these propositions are driven by a similar nomadic and contemplative relationship to the world.

CHRONOS, a performative project performed as a duet with the musician Laurent Bruttin, can be read as a corps à corps between a motionless standing-supine woman and a man who is actively creating an electronic musical score from sound recordings gathered during their wanderings in South America. During 5 consecutive hours, the two performative actions take place in a common space: a translucent box that unites the bodies of both performers, suspended between a trance and inertia.