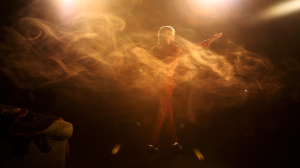 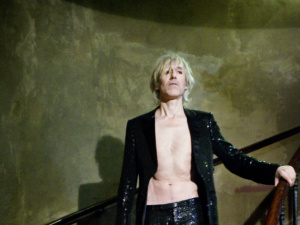 There are a thousand shows to be made from Proust. Indeed, what to choose ? This passage, and this one, and this other one too… and how to gloss over… Anyway, I would have to spend the whole night on it, “a thousand and one” nights, and I wouldn’t have the courage, and neither would you, we would have to give our lives over to it, we don’t want to, we want to be distracted, but, wait a minute, just think about it, is that not it ? Are we not going to give our lives over, even if only for two hours? Two hours is a lot. Giving one’s life over is a lot. I will try not to steal your time… so that you really feel it. Alone on stage, without artifice, Yves-Noël Genod delivers an ardent and poetic version of Proust’s roman-fleuve, À la recherche du temps perdu [In Search Of Lost Time], at once solemn and upbeat. La Recherche is an intense and singular experience ; an invitation to travel, divested of luggage — with that other poet, Yves-Noël Genod, as our only guide.

Yves-Noël Genod (born in 1972) is an actor, dancer and director. He staged his first show, En attendant Genod (Waiting for Genod), in 2003. Since then, he has enjoyed a steady stream of commissions; he has put on almost seventy shows and performances so far. A theatre without drama or action, leaving only poetry, ghostliness, traces and invitations. He presents himself as a “distributor” of spectacle, poetry and light, “inventing nothing which doesn’t already exist”. Yves-Noël Genod’s creations lead the audience into the midst of poetic experiences, making it impossible to distinguish between writing and improvisation. His shows speak of the experience of being alive, of the taste for living. A drive towards modernity rubs elbows with an inclination for the naff, and his desire for spectacle wrestles with emotion. He lives and works in Paris.