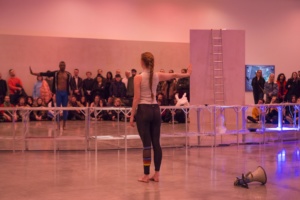 Looping motifs – sonic and danced – layered one over the other, purposely confounding and spasmodically synchronising with one another are presented in the form of a three phased non-linear narrative featuring four gold-painted protagonists. A red light washes the entire space. Spiralling choreographic patterns of dance and sound make manifest abstract phenomena such as depression, psychosis, obsession and desire. The visual aspect of the work will not change across its two episodes, though the sound will, and as such, so too will the performance at large.

Eddie Peake’s art includes performance, video, photography, painting, sculpture, sound and installation. It has tended to take the form of non-linear, immersive exhibitions, usually presented as a web of incongruously and yet inextricably connected discrete objects. One of its foci is the implicit drama within relationships between people, whether they are familial, professional, romantic, sexual or social, and how desire, sexuality, socio-political and cultural constructs, as well as psychological states such as depression impact on them. Peake is also a DJ and runs a record label imprint called Hymn.