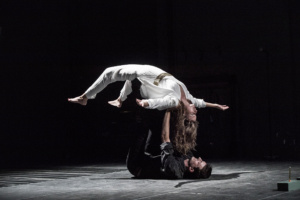 Rébecca Balestra’s ambition for her first show is to transform into a larger-than-life performer. To do so, she will reveal her how-to manual, Show Set, in which all the elements of set, costume and special effects are solicited in order to create the ultimate blockbuster. A veritable guide to success, described and tested on stage. From all this risk-taking emerges a sudden intimacy : We could go to Rolle, it would be lush. I’d order sparkling instead of still. I’d pay the price, I’d wiggle my tush. I’d stop saying life is evil, if you and me could rekindle our crush. Setting herself up as lecturer, slam poet and guinea pig, the actress plays with her enormous scenic potential : daring, fragile and comic all at once.

After graduating with a BA in Theatre from the HETSR in 2013, Rébecca Balestra (born in 1988) decided to lead a solo project titled Flashdanse, which was selected for the Quarts d’heure de Sévelin festival. During the same year, she was awarded a writing prize by the Studer/Ganz Foundation, and has since been involved in many stage projects as a performer. Alongside her career as a performer, she pursues her personal writing and directing projects. The creation of her third solo, Show Set, began at the Far° arts festival in Nyon in 2016, where she presented a work-in-progress version of the piece in the context of the Extra Time programme.