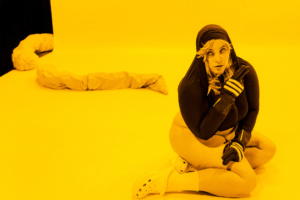 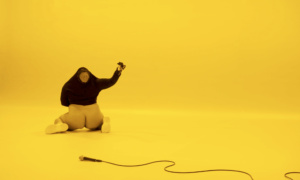 Teresa Vittucci has invited the composer and sound artist Colin Self to take part in the second instalment of her trilogy on the praise of vulnerability – the first instalment, HATE ME, TENDER, won the Swiss Dance Prize. As a duo, the two artists* focus on the origin of the female figure as depicted in Genesis and Greek mythology as being the first of all women: Eva and Pandora. Under the queer-feminist perspective of these figures, whose narratives and assigned roles were decisive for the position of women* in Judeo-Christian and Abrahamic societies, Vittucci and Self explore the tension between (female) curiosity, transgression and consequence in a poetic-artistic examination. At what risk?

Born in Vienna, Teresa Vittucci lives and works in Zurich. Her practice spans the fields of performance, contemporary dance, absurd comedy and film and questions the feminist and queer perspectives of pop culture, history and religion. Bad jokes are also always part of the process. Working mainly as a solo artist, she also enjoys collaborative work, having worked with Nils Amadeus Lange, Marilu Mapengo Namoda, Claire Sobottke, Michael Turinsky and Colin Self, among others. As a performer, she has worked with Simone Aughterlony, Marie-Caroline Hominal, Benny Claessens among others. She has received numerous awards for her work, including the City of Zurich’s recognition award for her work as a performer and the Swiss Federal Dance Prize for her work HATE ME, TENDER. She is currently Young Associate at the Tanzhaus Zürich.