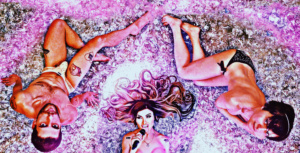 My coreintention is to create a liberating experience that is emancipating for both the audience and performer.-Vincent Riebeek

In his new piece ‘Uchronia’ (meaning literally no-time and also relates to utopia ‘no-place’) Vincent traces back the origin of dance/movement to its very beginning, proposing different ‘what ifs?’ within the knowledge mankind has towards its own creation. Creating collages and tableaux vivants of different choreographic materials from a wide spectrum of sources, this re-telling of what the world was, allows the performers and hopefully the audience to reimagine what is possible. Ultimately it is a practice of forging the future we would like to have.

Vincent Riebeek got introduced to the performing arts in his early teens through the competitive dance circuit and starring in musical productions. Whilst still in high school he got accepted to the Amsterdam School of the Arts where he followed several dance programs to eventually graduating with a BA in Choreography from SNDO (2013). Since he has presented work in Europe and abroad and received praise for making provocative work that balances a fine line between art and entertainment. He graduated with a MA in Theatre from Dasarts, Amsterdam (2018). His graduation work One of a Kind was shown in theatres in several European cities and is currently still touring. In 2019 he taught at the Spring Academy (Utrecht) and the master course for dancers LaCollectiz in Tel Aviv where he created the opening performance for Diver festival with the students. After completing a series of residencies in 2019–2020 at Tanzhaus Zürich and Arsenic Lausanne, he presented the resultant work entitled The desire to create something that already exists at Frascati Amsterdam.